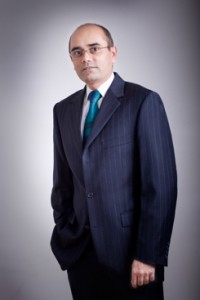 Mr Mahajan graduated from medical school (MB BS) in 1991. He then went on to do his surgical training in Ireland and attained his fellowship at the Royal College of Surgeons in Ireland (FRCSI) in 1999. Following this, he pursued his interest in Plastic Surgery and has been working in the speciality since then. Being keen on establishing a scientific foundation to treating his patients and practicing evidence based medicine, he has actively participated in research, having done his Master of Medical Sciences in plastic surgery (MMedSc) at the National University of Ireland, Galway. Based on his accomplished academic career, Mr Mahajan was offered a Research fellowship at the University hospitals of Geneva, Switzerland, where he pursued his research interests, worked in a wide variety of clinical and lab based projects that culminated in his Doctorate of Medicine (MD) in plastic surgery. In 2009, he also passed his specialist exam in plastic surgery (FRCS Plast), following which he was awarded the Certificate of Completion of Training (CCT) and placed on the specialist register for practising plastic surgery by the General Medical Council (GMC) in the UK. He was appointed Consultant Plastic Surgeon at Bradford Teaching Hospitals NHS Foundation Trust and Calderdale and Huddersfield NHS Foundation Trust in 2011.

Mr Mahajan has trained in units recognised for training by the British Association of Plastic, Reconstructive and Aesthetic Surgeons and the Specialist Advisory Committee in Plastic Surgery within the UK. He has gathered considerable and varied experience in plastic surgery and cosmetic surgery by working in various units in Ireland, UK and Switzerland. He has furthered his plastic surgical experience by doing a prestigious fellowship in Microsurgery and Breast Reconstruction at the Gent University Hospital, Belgium. Mr Mahajan has polished his cosmetic surgical skills by completing his Aesthetic surgery fellowship at Akademikliniken, in Stockholm, Sweden, which is Europe’s largest private hospital for cosmetic surgery. Akademikliniken’s ideology is to achieve ‘Beauty Through Science’ and it is one of the forerunners for Cosmetic surgery in the world.

Mr Mahajan has a specialist interest in Cosmetic surgery and has shared his experience by widely publishing and presenting his work at various international meetings. He performs…